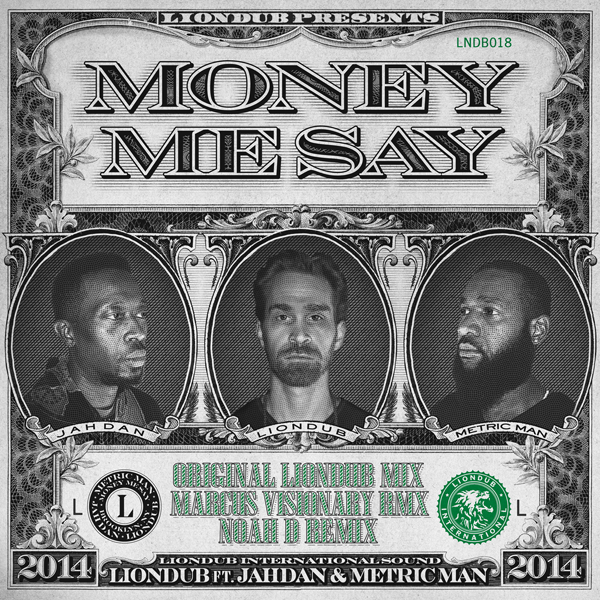 Returning to the boards after a strong label showing in fall 2013, boss man Liondub is back for the first time on the label since 2009 featuring NYC’s Jahdan Blakkamore and Trinidadian fire starter Metric Man. Fans of the label will surely remember the 2009 smash ‘The General’, another collaboration between Jahdan and LionDub and truly a massive tune that ignited dance floors and radio sets worldwide. The pair returns here with more fire, but they have both been busy since, with Jahdan earning writing credits and a Grammy nomination on the Snoop Lion album and LionDub busy with his infamous Wednesday night Koollondon radio show and touring spreading the word both on the streets of NYC and around the world. ‘Money Me Say’ features Jahdan on the chorus with the lively chat of the pair on the verses and a heavy dread skank as they graphically describe the struggle and the everyday hustle to stay alive.

Returning to round out the package are Liondub International veterans Noah D and Marcus Visionary. Both blessed remixes of the General in 2009 and return, hitting hard once again. Noah D flips the track in an even heavier version, referencing Bristol’s purple sound in his keyboard production; portions of the vocals are kept in place, but more as samples than the fluid narrative of the original, with the dramatic production contours maintaining tension and modern day trap influences resonating throughout. Even more transformative is Marcus Visionary’s slow jungle remix, which strips most of the original away and deploys only the chorus and short vocal snippets over an entirely new backing track in Visionary’s signature style with heavy sub bass and classic breakbeat pressure. This is the first of a series of releases from Liondub featuring Jahdan and Metric man, and if this is any indication, this is a project well worth watching closely.