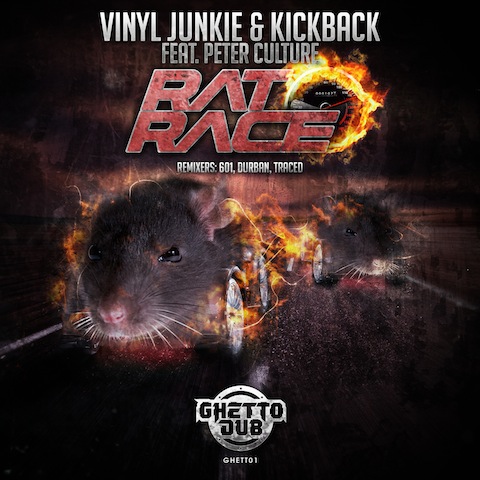 Fusing many styles and genres from within the realms of good quality, bass-driven electronic music, industry legend Vinyl Junkie and DJ sensation Rachael EC are very proud to present the launch of their brand new label, GHETTO DUB.

For the first release, Vinyl Junkie teams up with Kickback and Birmingham based reggae vocalist Peter Culture, to bring you “Rat Race”; a powerful song which Peter wrote as a teenager in the 1980’s that still resonates with the youth of today. Accompanied by some thumping 140BPM breaks, growling subs and 808’s coupled with grinding bass stabs and reggae and rave influenced harmonic pads, this track spectacularly launches the fledgling label and gloriously pilots it's premiere with a sound that represents the labels mission statement well.

Yorkshire's première purveyors of bass and breaks, 601, step up for a remix that drops the tempo to 130BPM, bringing elements of house with a big pulsating riff, bouncing beats and 808's emphasing on the melodic aspects of the original. This will go down a treat with fans of the Stanton Warriors and Freestylers pantheon of sounds, making it a solid choice for any tastemakers out there looking for a solid addition to that Beach Party or Festival set showcasing an alternative angle on an already solid track.

Bringing the jungle pressure and hot off of critically acclaimed releases on Asbo Audio, Durban gets militant with weighty breaks and a roughneck bassline that will leave a hole in your chest and for the devout followers of the drum and bass sounds, Traced goes full attack for an energy fuelled techstep offering with a massive driving hook, sharp as a razor that whips the listener up and onto a euphoric roller coaster ride that fans of RAM and Technique Recordings will absolutely adore.

Starting as they mean to go on, Ghetto Dub Recordings present this first absolute home run of a debut single, paving the way for a release schedule that is already hinting at some powerful new releases from some of the UK's most promising producers.