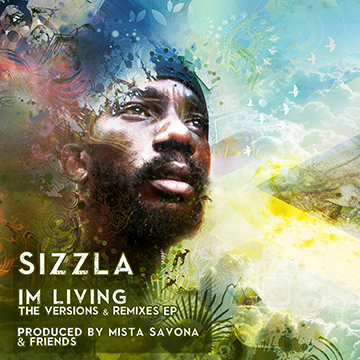 'I’m Living' is the stunning first single from the forthcoming album 'Born A King' by Jamaican artist Sizzla. With its soulful and uplifting lyrics, Sizzla delivers a bonafide roots reggae anthem that reflects goodwill towards all humankind. The riddim is an original created by Australian reggae producer Mista Savona, and as part of this release we are also featuring a vocal reworks by Reggae and Dancehall legends Cornell Campbell, Burro Banton, Prince Alla, Ilements and Pinchers as well as Electronic remixes by Mista Savona, Ed Solo & Stickybuds, Gaudi, B.R.E.E.D, Beam Up and 3rd Eye.

Sizzla has 21 albums that have made it onto the Billboard's Top Reggae Albums music charts, the highest being 'Words of Truth' (2000) which reached the peak position of #5. We are honored to be representing such esteemed artists on Muti Music, which takes the label in a new direction - whilst allowing us in turn to take these collaborations with Jamaican artists in a unique direction of our own.

To give some background, last year whilst on tour in Australia we met Mista Savona, a Melbourne based producer who had just returned from Jamaica with a bag of new riddims and an almost-completed album with legendary reggae artist Sizzla. We checked the tunes and loved the fresh new sounds and very positive feel of the record, with its uplifting messages and inspired vocal performances. In the coming months as we lead up to the album’s 2014 release, Muti will be releasing a series of Remix EPs featuring producers at the leading edge of dance music globally - each with their own specialty genres and unique spins on these epic tracks and riddims.