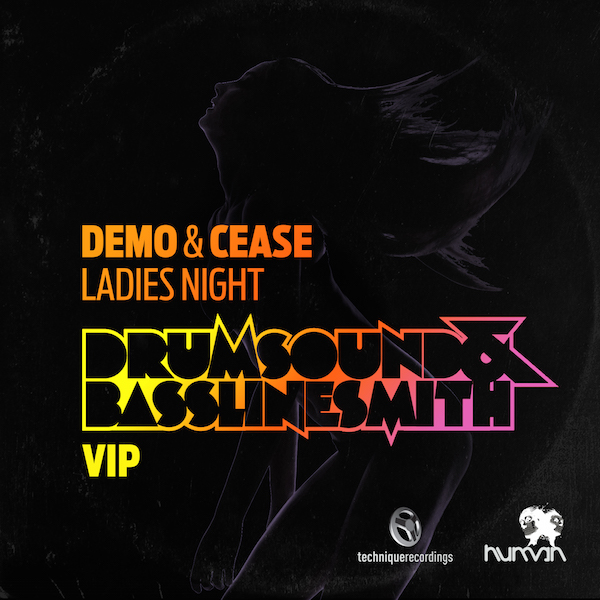 This tune's already been an anthem twice over and now it's back for the hat-trick. First, it earned its stripes as a general-purpose weapons-grade rave-killing dubplate in the sets of top echelon selectors. Then, in 2007, it dropped on general release, original on the A-side and VIP on the flip, taking out a whole new wave of parties with the fallout. And now it's time for round three, in the form of a transatlantic team-up between Technique Recordings and Human Imprint. This is Demo & Cease's “Ladies Night” reconfigured for 2015 by the masters of the main stage Drumsound & Bassline Smith.

As you'd expect, the Technique bosses have shown the utmost respect for the original. There's still the slick, lounged-back jazzfunk intro, setting up the unwary for a ruder-than-rude awakening. If you're not ready for it, the classic, “That bitch is a ho!” call to action pierces the warm and fuzzy atmosphere like an icicle to the heart. Then a militant build gives the dance floor another sixteen bars to recalibrate ready to come correct for the almighty drop.

That drop delivers everything that you've come to expect from Drumsound & Bassline Smith. Simple and elegantly vicious drum programming allows each punch of kick and snare to deliver its full bodyweight. The alarm-call riff punctuated by a variety of modulating bass tones keeps the energy levels unrelenting. And the interspersed vocal samples and road-hard fills combine to confirm this track's straight up thugness.

You couldn't really have expected anything less. In every incarnation, whether its Demo & Cease's percussive tech-driven original or the huge VIP mix, whether on dub or full release, this tune has been an anthem. And now, in this high-powered collaboration between Technique and Human Imprint, with Drumsound & Bassline Smith at the controls and support from the likes of Andy C and Friction, it's set to be an anthem one more time.